How To Find Happiness: It Doesn’t Come From Feathers, Carpets, or Magic 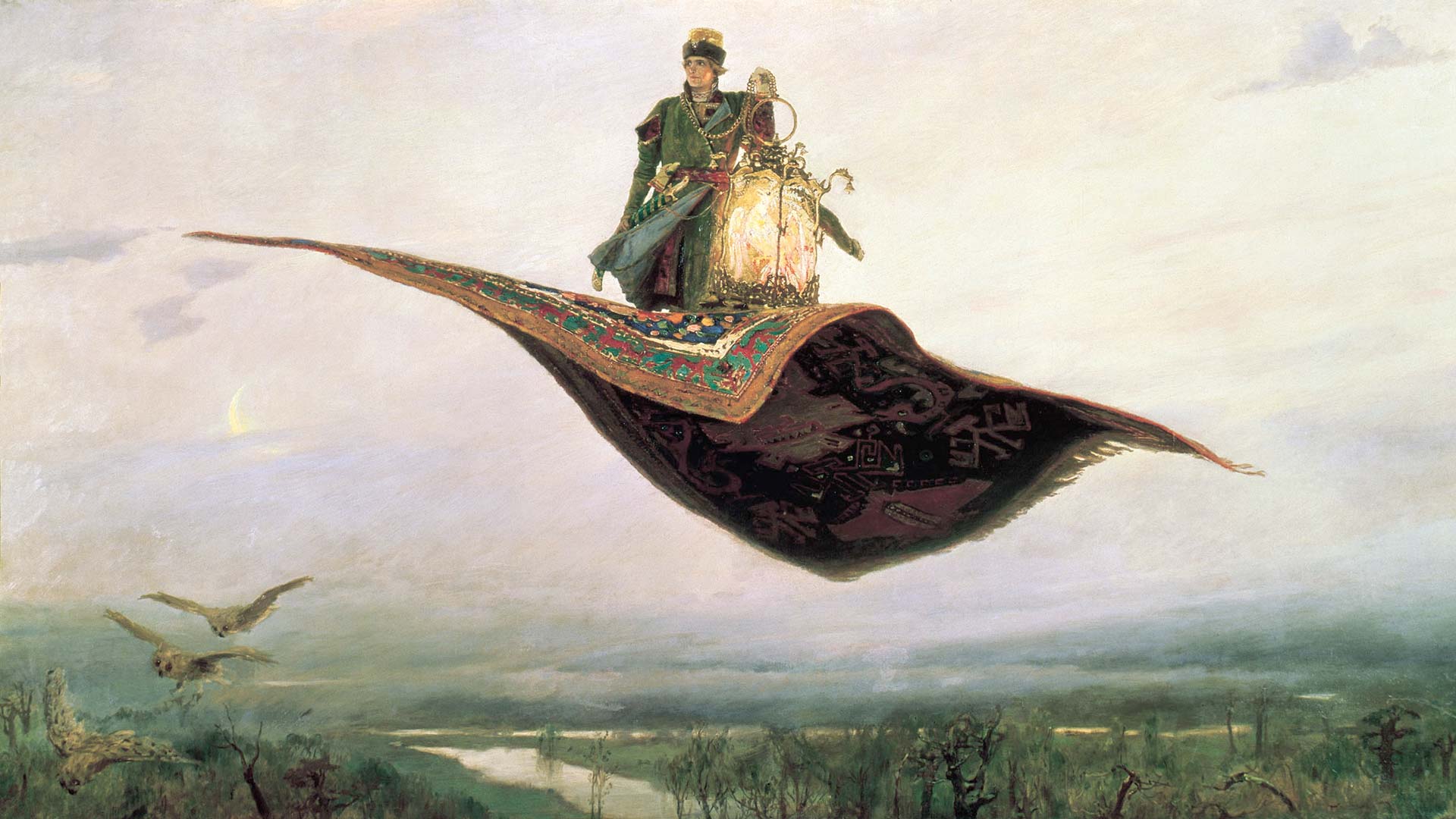 Getting what you want does not fulfil your true desires and make you happy, especially when your reality starts becoming very undesirable.

An undesirable, very dark and unfriendly place is what I started to experience, and I asked the universe for my life back.

You can read what happened next below.

The universe does have answers.

My request was answered by being introduced to what is known as the law of attraction, where we can manifest our reality.

Literally within a few days of asking, a client who I was helping to develop a business online started talking about something very off-topic.

He asked me if I had watched a movie called The Secret, and as far as I recall, he described it as being about attracting what you want.

Despite the off-topic conversation, a part of me was drawn to what he was saying, and I said I would watch the movie.

I ordered it from Amazon and watched it.

At the end of the movie, I was quite stunned that we humans could have the power to attract things and experiences without directly working towards what we wanted.

There was also something that one of the presenters said which brought me to tears.

That moment was so personal and made me realise something about myself that had been hidden by my so-called desires and expectations in life.

I share that moment to close friends, and transformation and healing clients, when I know it will help them.

After watching the movie, a part of me was in awe of what I had been introduced to, and a part of me found it difficult to accept.

I watched the movie a few times, bought the book and audio versions, both of which had more detail.

Actually attracting things with our thought.

There was one one example of someone testing the law of attraction and it working for them.

That example kept coming to mind, and so I tried it.

A man imagined a feather with a specific pattern, perhaps so that he could confirm that it was him attracting what he imagined when the feather appeared.

The feather with exactly the same pattern as he imagined appeared at the foot of a revolving door to what seemed to be a city office.

It is also quite awesome that a bird with similar feathers would be flying around in the middle of a city.

And yes, we can say it is coincidence, and that is what a part of me thought.

So, I did the same test.

I imagined a feather, and it appeared in about a week or two.

It’s a bit decayed and tattered now as it was in the open air for a long time, but here it is stuck down on a page: 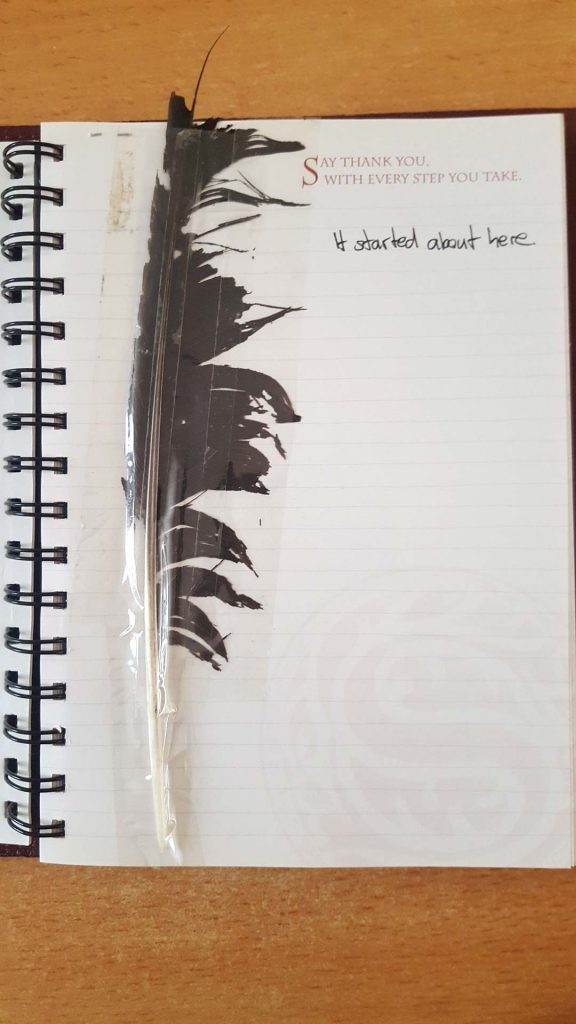 Other feathers appeared over the next week or so, and almost exactly in the same place.

I wondered by the feathers were all black, and eventually recalled that I didn’t imagine a colour or a pattern for the feather.

I thought only of a feather about the size of my hand.

Then my mind said that they were feathers from a crow that could have been perched above where they appeared.

My mind also did not recall these feathers, and or any other types of feathers, ever appearing in or near this one place, for me anyway.

This created more questions whether what was happening was me doing it, and I desired some sort of answer.

My experience of life seemed to continue to become dark and unfriendly, so I tried a more useful and practical test.

At the time, I lived in a flat (an apartment) which was on the ground floor of a 4 level building.

There were two doors to the building, one of which was used more as it was closer to the parking area.

The section of the carpet in the building next to that more used door was getting quite dirty and worn.

I slightly recall that someone may have asked the building maintenance company to clean or replace the carpet.

However, the carpet stayed worn and most people in the lower flats were not happy about it.

I remembered how the carpet was previously clean and tidy, and that’s what I imagined the worn carpet to be.

I had forgotten about this test even after a new carpet was put in, but recalled the whole experience later.

We can attract what we want.

Under the stairway to the upper floors, there was a pump that pumped tap water to the other flats in the building.

The pump burst a leak and started pumping water over the floor in the storage area, and then the water overflowed into the hallway onto the carpet.

Luckily, the water did not overflow the step into the each of the flats.

And so the carpet was lifted to let the hallway dry before a new carpet was fitted: 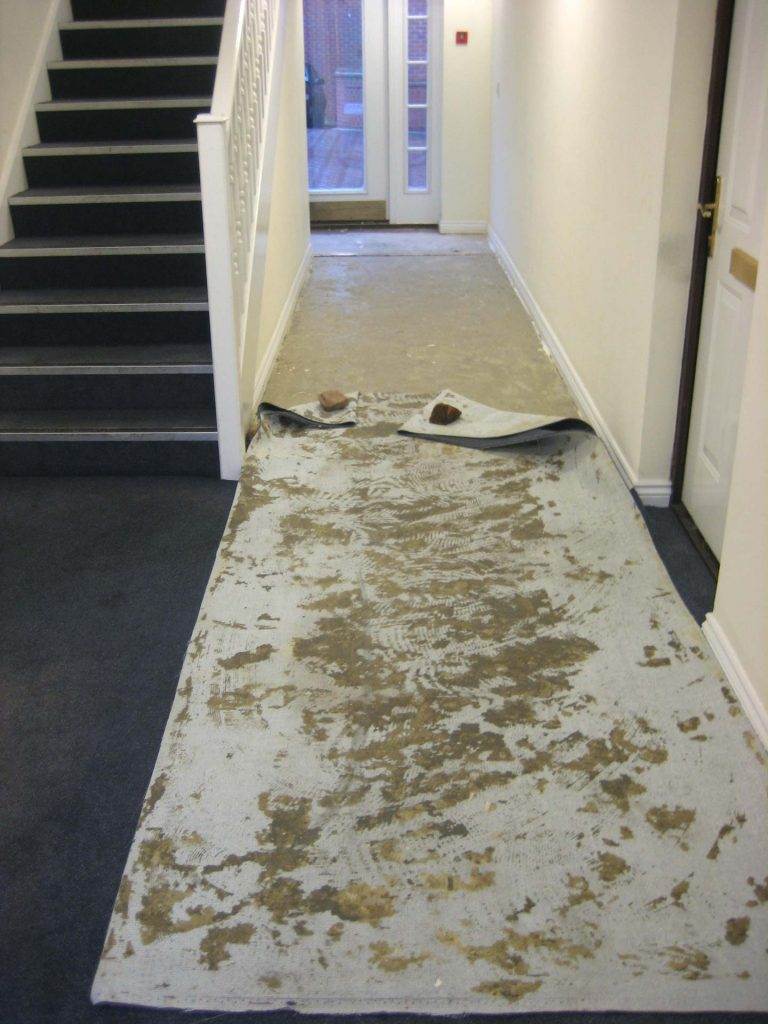 I had forgotten about all this till much later because my experience, up to and after the carpet being replaced, was continued to be dark and unfriendly.

I did more tests in attracting things and experiences, with some of them being a part of me not expected to happen, but most of them worked.

However, these tests of attracting what I imagined may seem interesting and even awesome, but they simply did not make me happy.

I knew that I was missing something, and this knowing was confirmed by someone who replied to my examples of attracting things and experiences not bringing happiness.

That person actually said what I described as being was very supportive of their journey, and it was useful for my journey as well.

They said something like it feeling as if they were playing a game of magic where they could make things appear, but it not bringing true happiness.

Such experiences of attracting things and even experiences were really no use to me, especially when I continued to have undesirable experiences.

However, the support such experiences did provide was in creating an understanding that manifesting what I wanted did not make me happy, or keep me happy.

How to find happiness.

My mind and its intellect were now really being challenged.

I can make things appear, and get what I imagine, but the experiences are not making me happy.

And my dark and unfriendly experience did not seem to be getting much better.

That is when I put in the next request to the universe.

I wanted to know what I was missing.

If attracting what I wanted does not make me happy, I wanted to know what I had to know.

The universe replied soon after in 2008, and showed me what I had to know.

It was that if we can attract things and create experiences in our reality, then we have also attracted and created the negative experiences.

And with my experience of being in a dark and unfriendly place, call it hell if you wish, it made absolute sense, more now, that it doesn’t matter what you attract and make appear, if you are in hell.

This was confirmed a little later with what someone said to me, and which I will let you know about some other time.

All this was quite difficult to accept at first, but the more I thought about it, and the more the universe brought information and teachings to explain it all, the more it all seemed a possibility.

The universe introduced me to more information and spiritual teachings which really made sense, and sort of helped me manage and resolve some of the negative experiences I was having.

But I felt that I could not properly and practically make use of what I had been shown.

It was not easy using the information and teachings whilst trying to live a day to day life with our usual tasks, and whilst a lot of the dark and unfriendly experiences continued.

However, as the information made sense, and the teachings worked to resolve some undesirable experiences, I wanted a better way to do what was working.

The universe replied again and again soon in 2008.

I was introduced to information and teachings that were more practical for me.

The new information and teachings helped me to resolve specific undesirable experiences, and started to create noticeable changes and quite surprising transformation in specific life situations.

I went deeper into the information, teachings and my practice, and 8 years later in 2016, the universe gave me another answer of sorts.

It showed me that the information and teachings I received years earlier in 2008, were all that I perhaps had to know and practice.

I realized that other aspects of life, such as things and experiences that we desire and need, come to us without always having to directly work for them.

We have to first get out of our own way, out of any negativity, out of dark and unfriendly experiences, and out of any hell we are in.

These undesirable experiences are not created by the physical things, people, places or the life situations that we find ourselves in, even though they all play their part.

They have been created by being attracted by you, and that is why we cannot go out there and make changes to undesirable experiences.

Any changes we try to make ‘out there’ by doing and wanting things will create more similar undesirable experiences.

That is the level our mind and its intellect usually works from.

‘No problem can be solved from the same level of consciousness that created it.’

The lesson was that if our mind and its intellect knew the solution, we would not be experiencing undesirable situations.

That is why we cannot experience lasting happiness, answers, and freedom by trying to change our thoughts, emotions, body and its sensations and condition, nor our external life situations.

Transforming and healing undesirable life situations happens from another ‘place’.

A place which my mind and its intellect previously did not know existed.

And if you don’t know about that place existing, then your mind and it’s intellect cannot help you break free, and avoid getting into negativity, problems and being stuck.

You may find this all a bit overwhelming, strange or even unbelievable.

You may be feeling lost or wanting a different answer, a quick fix to your problems, or just get on with what you know and believe of how to get things done in life.

I felt all those feelings over many many months.

However, if you really want to break free and really experience your true happiness, answers and freedom in life, then this is the truest and most useful information I have for you.

The following clip from the 1999 movie The Matrix gets the point across quite well.

I recommend watching the whole movie as it has a lot of scenes that point to the truth of our physical reality.

The next step is to choose to get to that place to experience the truth of what I am saying.

It is that only place from which you can start to break free and avoid getting into negativity, problems and being stuck.

From that place, when you digest the information that came to me, but more so practice the teachings you will experience your happiness, answers, and freedom in life.

You will then experience real and lasting transformation and healing in your life situations.